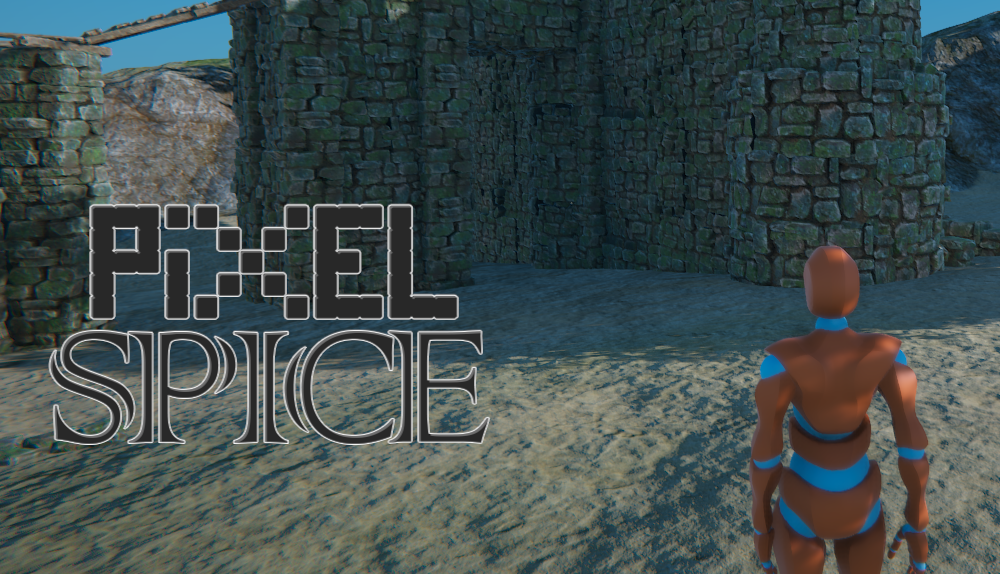 Stone and wood – two staples that no fantasy RPG should ever be without! KK Designs “Modular Stone Wall Kit” promises to deliver those two things, and only those two things, at a high enough quality for a AAA game, and for only $8. Spoiler alert, it comes pretty close at a remarkably low price on the Unity asset store.

This is one of my favorite parts of the kit. The stone and wood included have very rugged and rough edges giving  the models a few advantages when trying to build an organic look. For example, when things overlap slightly or come together at a slightly wrong angle, it doesn’t look wrong or fake. You can link things together with slight imperfections, and instead of sloppy it looks natural. Take a look at the picture below for an example: 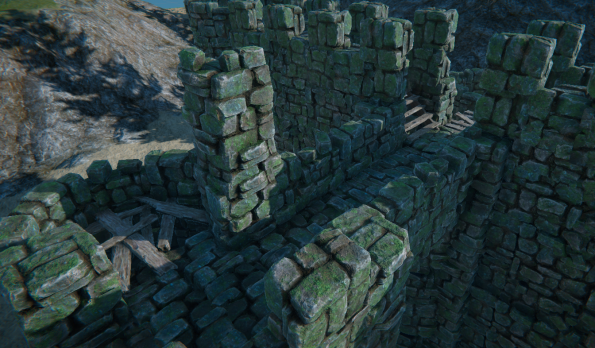 Stones fit together nicely even when not matched up perfectly.

Those stone walkways? Pillars, stairs, and walls, all mashed together. It’s hard to tell they aren’t intended to be used that way.

Physically Based Rendering, Materials, and Lighting 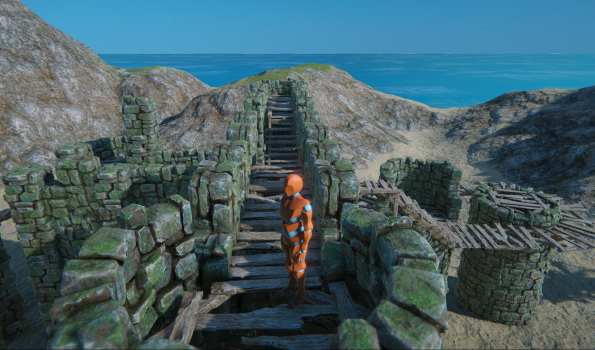 Lighting is incredibly important in games. It’s one of the main reasons that a lot of early demos and content for games can look mediocre at best, even when using high-fidelity assets. Physically Based Rendering (PBR), is supported by most major engines now, and is all but necessary for a realistic-styled game that is going for even the indie-equivalent of AAA. While you can swap anything to a PBR shader, unless you specifically use proper texture data, the asset doesn’t end up looking quite right. So, how does this asset stack up?

Take a look at this daytime image and think about what sticks out to you about it. Nothing, right? The lighting is maybe a little bland/boring/normal, but the rocks don’t look overly shiny, and the light plays off the rocks naturally. That’s great and all, but it doesn’t really show us much about the accuracy of the PBR except that it looks okay in a well-lit sun environment. Let’s take the lighting on a slightly different path and see how everything looks. 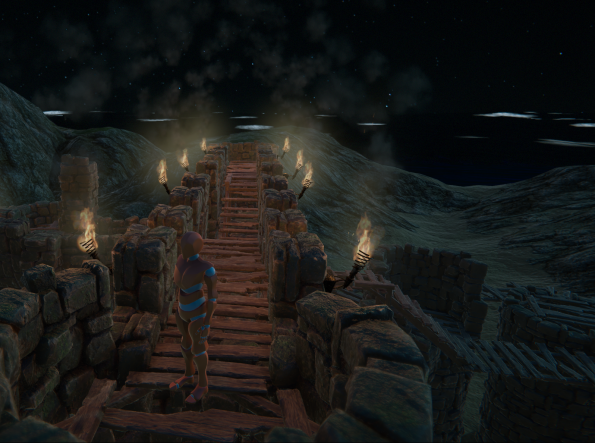 Adding a few torch lights (not included with this asset), and “turning down the sun” gives us a lot more information about how the materials are responding to light. If you look at the torch light, the rocks behave just like you would expect rough rocks to behave – pock marks, a bit of sheen, but still an overall rough appearance. Similarly, on the right of the image, you can see an example of how the lighting looks under just moonlight.

Overall, the textures provided give you the lighting experience and feel you want for a good looking scene. But there are a few things that could be improved.

What could be better?

While I have quite a few things that I love about this Unity asset – the roughness and feel of the rocks, the way the wood looks in motion, and the overall quality for the price tag – it isn’t without it’s drawbacks.

While the textures looks nice, it’s painful to not see 4k textures included. The textures look nice, and the lighting looks nice, but up close at high resolutions, they do appear a bit blurry. Honestly, for $8, they are great. For mobile? Killer. Advertised as AAA? Would be nice to at least have the option.

In addition to the textures, the models have some pretty obvious patterning going on, even before you start adding multiple parts together. This makes it a bit difficult to de-pattern yourself with rotation and scaling, as it’s harder to provide variance to a single mesh. The included debris rocks can work wonders on de-patterning flat surfaces, but it’s a bit more difficult with the round pillars: 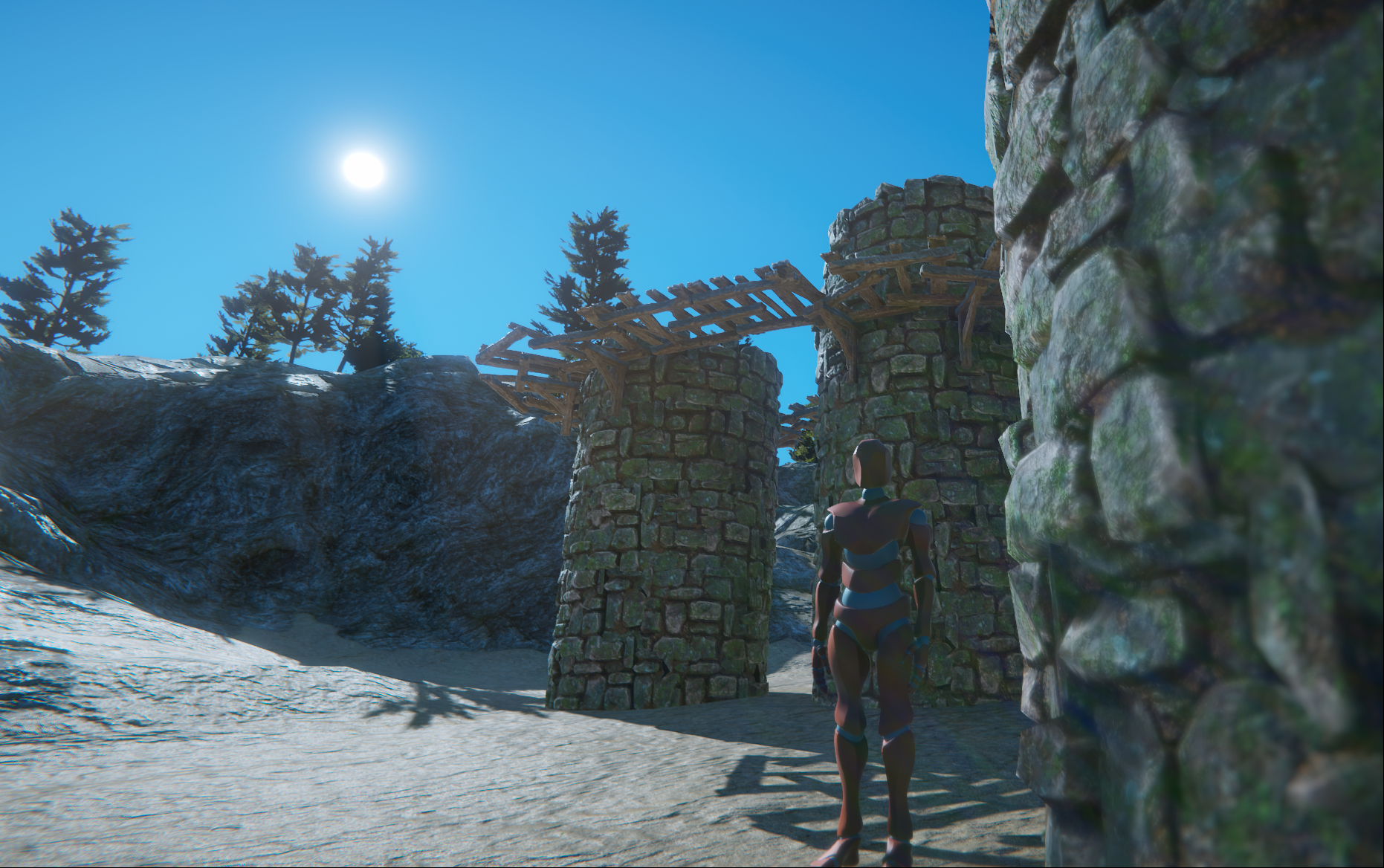 The pillar on the right is actually 1.5 visible prefabs, but appears to be 6 stacked. 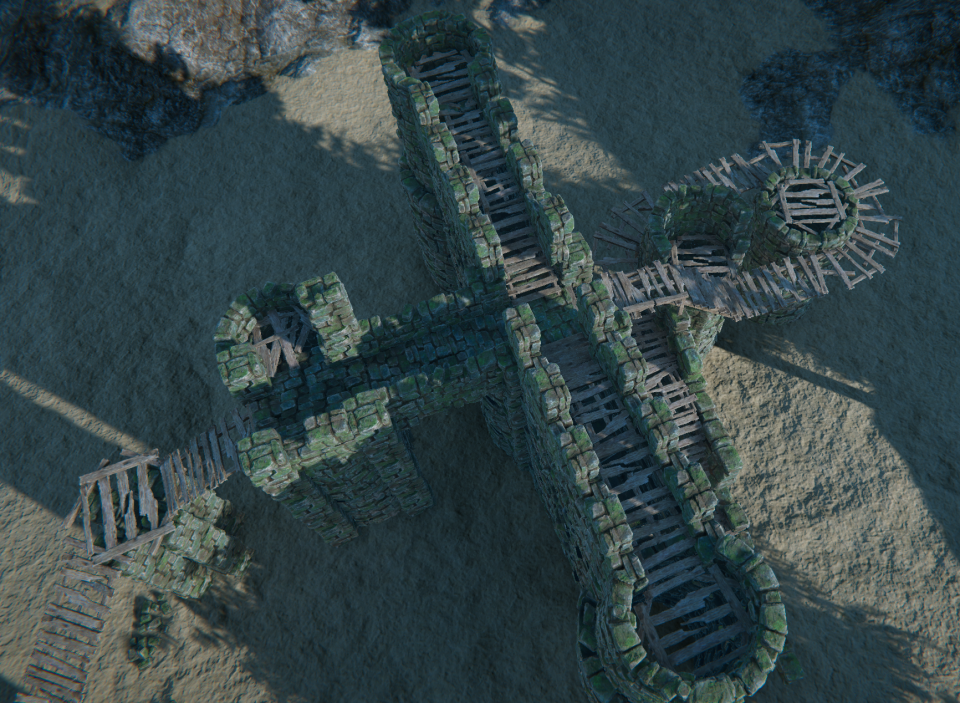 Overall, this doesn’t seem to be a show-stopper to me. It’s slightly aggravating, but depending on the use case you can still get AAA looks with both of these issues. For example, neither of these are issues for a AAA top-down look, where things are going to be a bit further from the camera, and the angles that cause apparent patterns aren’t going to be shown.

You can mimic this yourself in an FPS or third-person game, by keeping the vertical elements to a minimum, but that spoils some of the usage of a stone wall kit, doesn’t it?

I know what you’re thinking. “Sammy, didn’t you just say you liked the modularity?” You would be right! Be glad that it’s easy to match things together without having to worry about perfect matches or vertex snapping, since sometimes you won’t have the exact part you want. There are a couple missing wood parts that would make quite a bit of sense – namely rounded stairs and stairs without an attached platform. 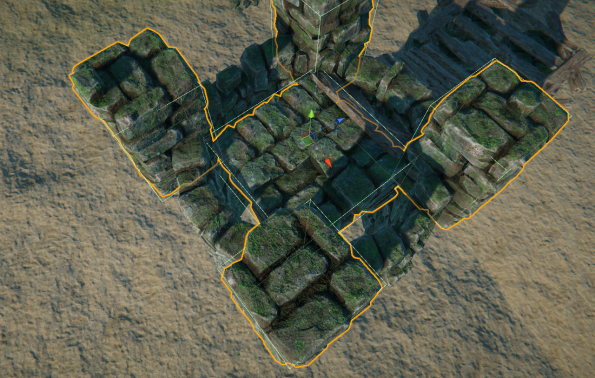 A misfit of a platform in the bunch.

The bulk of what seems to be missing, however, is stone. It would be nice to have a couple larger wall parts, and a couple stone walkways in the package. There is exactly one stone “walkway” included in the kit, and it includes four posts next to it, and can’t just be used as a generic walkway.

This part is actually very useful, but it would be nice to have a few larger versions of generic parts to be able to make the part myself and vary it up a bit more.

While included in the asset store post, it’s worth showing what all is included here as well.
Stone:

Overall a decent selection, especially for the price.

Overall the asset looks nice and is easy to work with. The asset performs remarkably well though. The demo castle I built has just over 1.3M tris and 1.6M verts, and an overall impact of less than 0.1ms on a GTX 1080. While there are some minor gripes about the claim to “AAA” with a patterning issues and 2k textures, it’s probably still worth $8.

Other assets used in this demo:

While I could show the assets on a boring plane, throwing together a small world with a character for scale adds a lot to the look and feel. The tools below help create high-fidelity looks with very little effort:

Gaia creates terrains in a flexible way based on both generation, stamping tools, as well as tools for handling the generation of trees and other objects. It even can setup CTS and Tenkoku (below) for you! If you build terrain, this is a must imo.

CTS is simple and lightweight. It does what it does well, and doesn’t glitch out like some terrain shaders do.

Tenkoku has it’s flaws, but it’s easy to setup and is nice complete package for time of day, ambiance, and weather.

There are plenty of demos and reviews for Ootti’s motion controller on the store. While I ended up going the custom route for Jackie & the Crystal, this is an excellent third-person character controller.

Real Ivy by 3Dynamite is an editor extension for generating procedural sprawling meshes.